For resiliency purposes, Layer2 topologies are designed and deployed in a physical loop.

Unlike the IP protocol which uses the TTL field as a built-in mechanism for preventing packets from looping endlessly through the network, the Ethernet protocol does not provide such facility and therefore, unless we can prevent a layer2 loop, the following problems would occur:

Symptoms of a broadcast storm ...

A Broadcast storm could have a high negative impact on network connectivity. However, given the evolution in hardware and compute power, broadcast storms could also be very difficult to detect and troubleshoot. The following could be indicators of a broadcast storm:

The STP (Spanning Tree Protocol) was developed to avoid the problems above by dynamically determining a logical, loop-free layer2 topology. It does so by temporarily blocking ports and therefore eliminating the loop; should a link failure occur, relevant ports are automatically enabled and a new loop-free topology is determined.

In the real world ...
Whether or not a physical loop exists, STP should still be enabled as a fail-safe mechanism against Layer2 loops which could be introduced as a result of human error.

In time, STP evolved into several standards as below:

Note that despite several STP versions, all of them function on the same fundamental principles introduced by the original STP and therefore, making them backward compatible.

In this first part I will therefore dedicate this blog to the fundamentals of STP 802.1D; part II will follow with the enhancements implemented within the protocol to speed up convergence.

The illustration above is widely accepted and supported by Cisco’s CLI output:

Notice that the Extended System ID and the Bridge priority are displayed as one!

Notice that the Priority is 32768 and not 32769; also the VLAN ID is identified as the System ID extension.

The Spanning Tree Protocol relies on BPDUs which are sent throughout the entire L2 network. Each BPDU contains the following information: 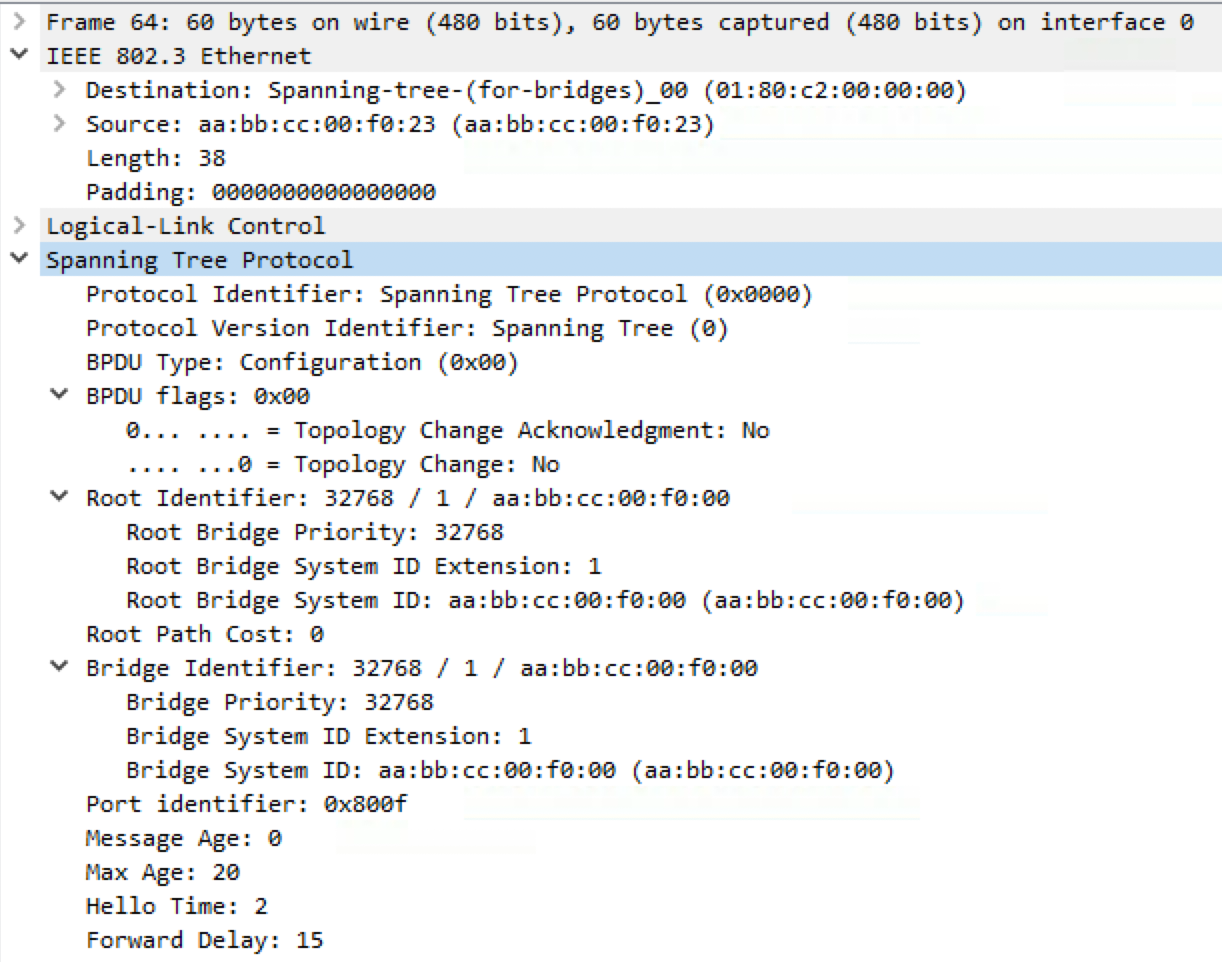 By default ...
Since by default, the BP is the same for each VLAN, the Root Bridge will always match the bridge with the lowest MAC address, unless the BP is changed.

STP identifies the following port states along with their timers:

Transitioning through the port states ...

Below is an example of how ports transition through the different states; in this case, the process starts as soon as the interface on the switch is enabled:

Furthermore, a port that is in a BLOCKING state, waits an additional 20s (10 x HELLOs | MAX AGE) when transitioning to LISTENING state. This would happen for example when a topology change is required due to a network failure in which case, one of the previously blocked links, would need unblocking.

We can clearly see that it takes a minimum of 30s – 32s (+2s HELLO)  for a link to transition into a data forwarding state; but could take up to a 50s-52s in reconvergence scenarios.

The Port ID & Port Priority
Note that there is no explicit Port Priority field in the BPDU. However, the port priority is deducted from the Port ID field – this is a composite value comprising of 4 bits for Port Priority and 12 bits for the interface ID (similarly to the Bridge ID).

HOW DOES IT WORK?

One important process in determining a L2 loop free topology is calculating the link costs. In all documentation I found online, the link cost is being used. But we don’t really assigned costs to links per-se, rather to interfaces. So one question I had was: What is the assumed link cost when assigning different values at each end of a link?

I then decided to just lab it and experiment and came up with the topology below where I have tried to move away from the defaults: 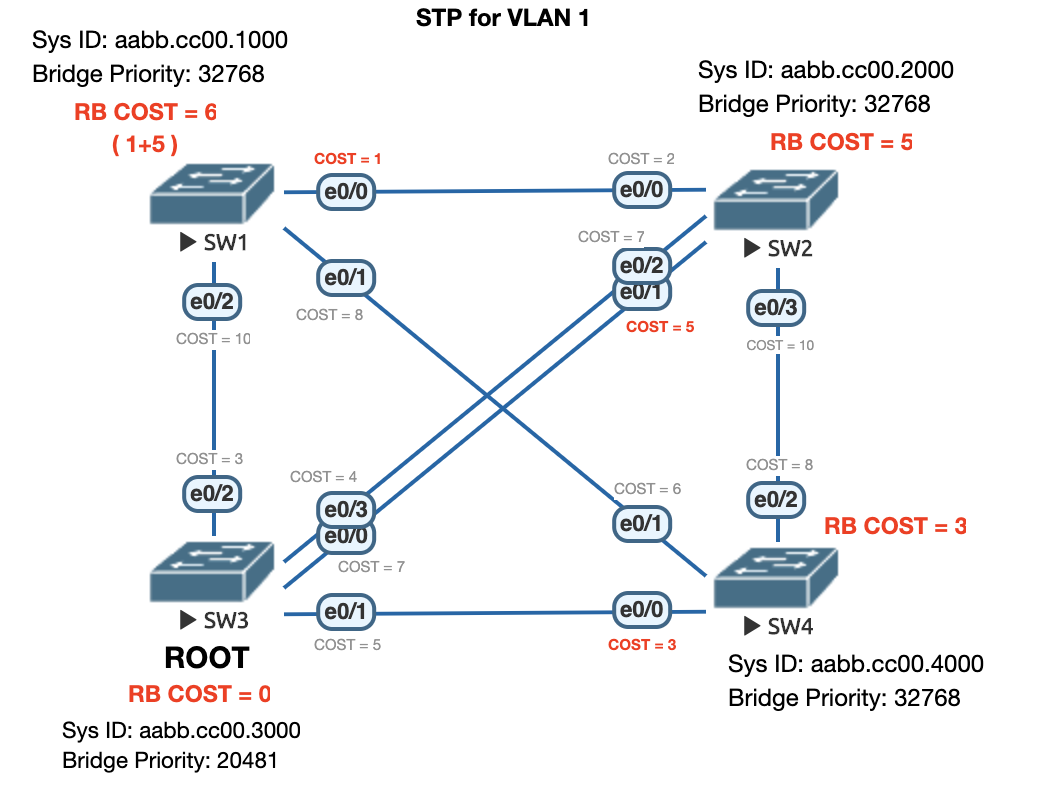 I. Electing the Root Bridge (RB)

Initially all switches declare themselves as root and start sending BPDUs out, every 2s; the switch with the lowest BID becomes the root bridge (RB). In this case, notice that Bridge Priority on SW3 is the lowest and therefore, SW3 becomes the ROOT BRIDGE.

As discussed already, BPDUs will carry cost information as they get sent out. When a switch receives a BPDU, it will add the cost value set on the incoming interface.

Which interface cost is the link cost?
Regardless the different cost values on each end of the links, the assumed link cost will be the cost value set on the upstream interface, towards the root bridge.

If we take for instance a BPDU originated and advertised out interface e0/2 on SW3, the Link cost is set to zero – it makes sense as the cost to reach itself is indeed nil. When receiving the BPDU on interface e0/2, the cost is incremented to 10 – the local cost e0/2 interface. Further from SW1, as it reaches SW2 on e0/0, the cost will again be incremented to 12 (+2 – the cost on e0/0 interface on SW2); and so on…

So to workout the cost to the route-bridge, we just need to add the costs on the upstream interfaces towards the route-bridge (in reverse order from how the BPDUs get advertised).

With that understood, we can now workout the Route Ports.

Using the same logic, I worked out all other RPs.

Eventually, we should end-up with a topology like this: 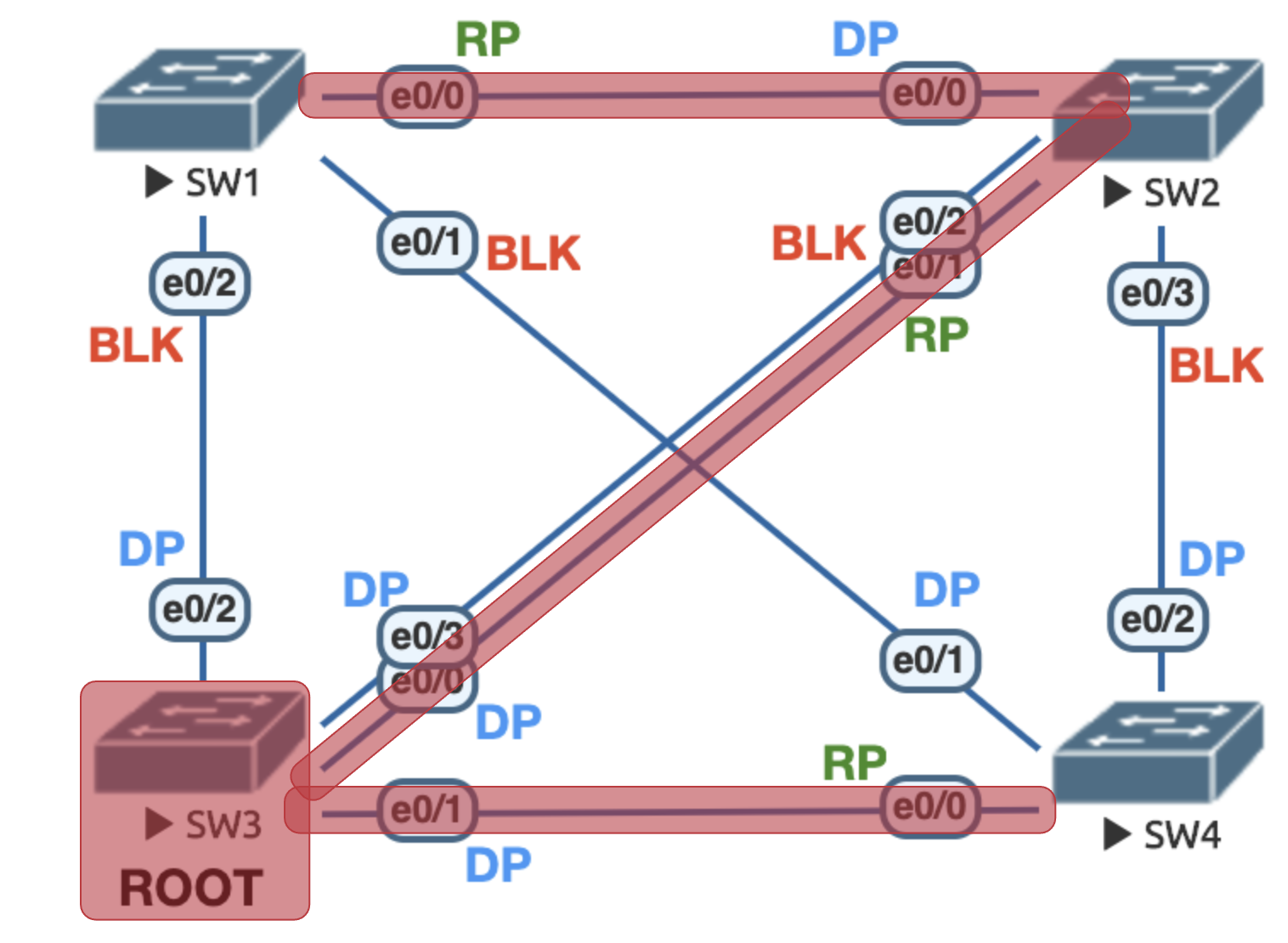 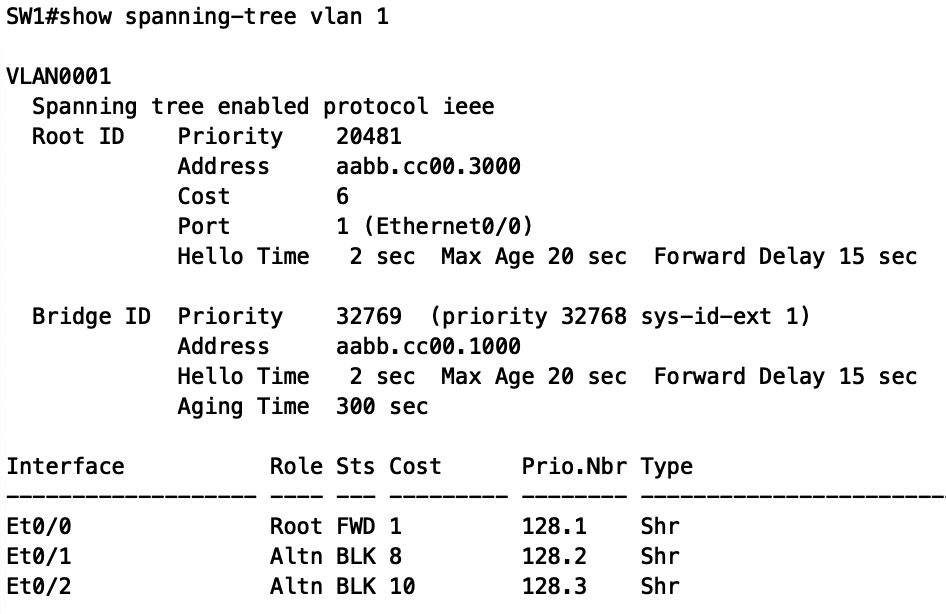 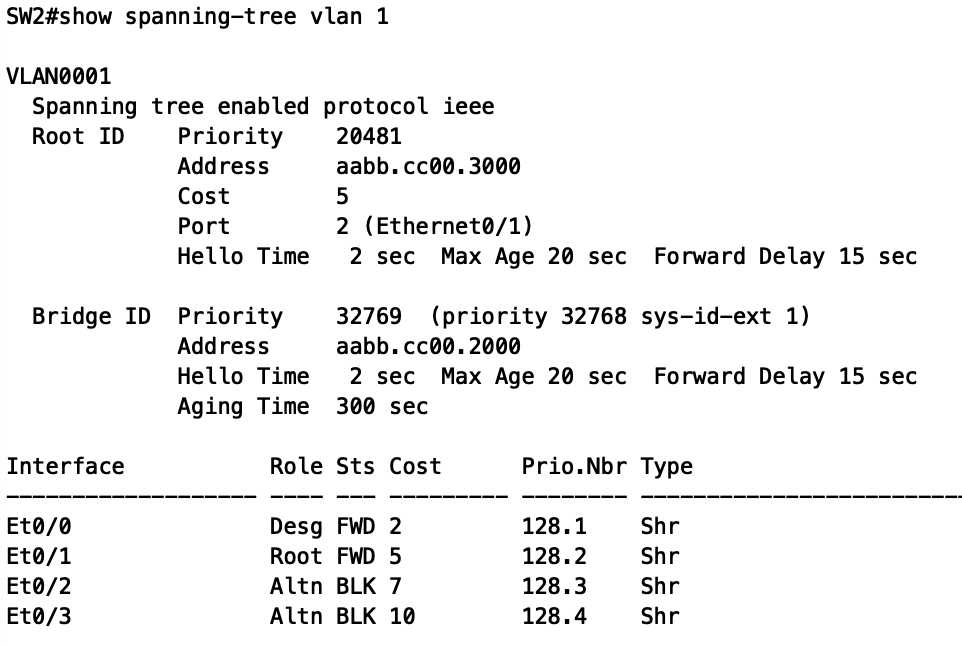 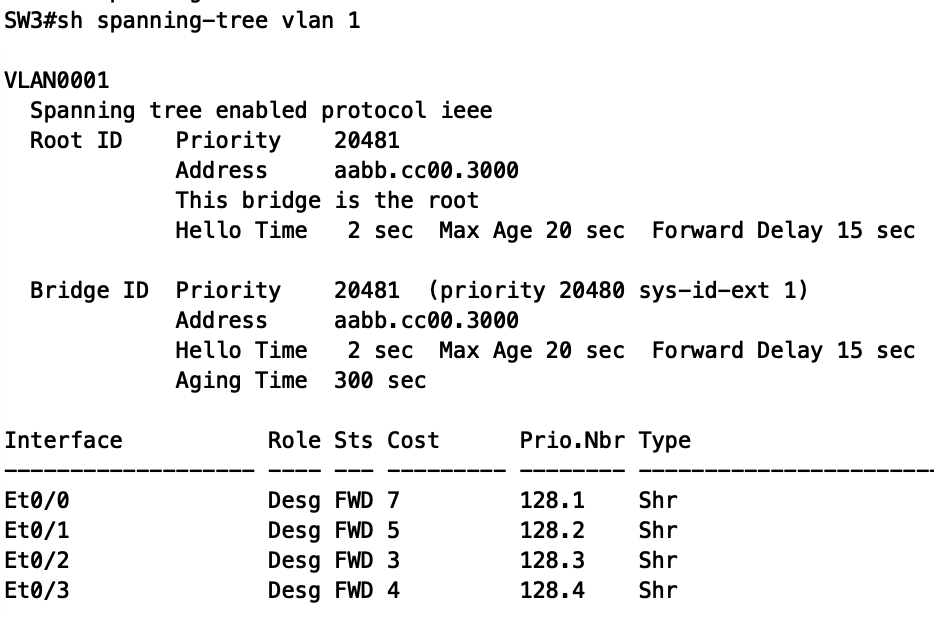 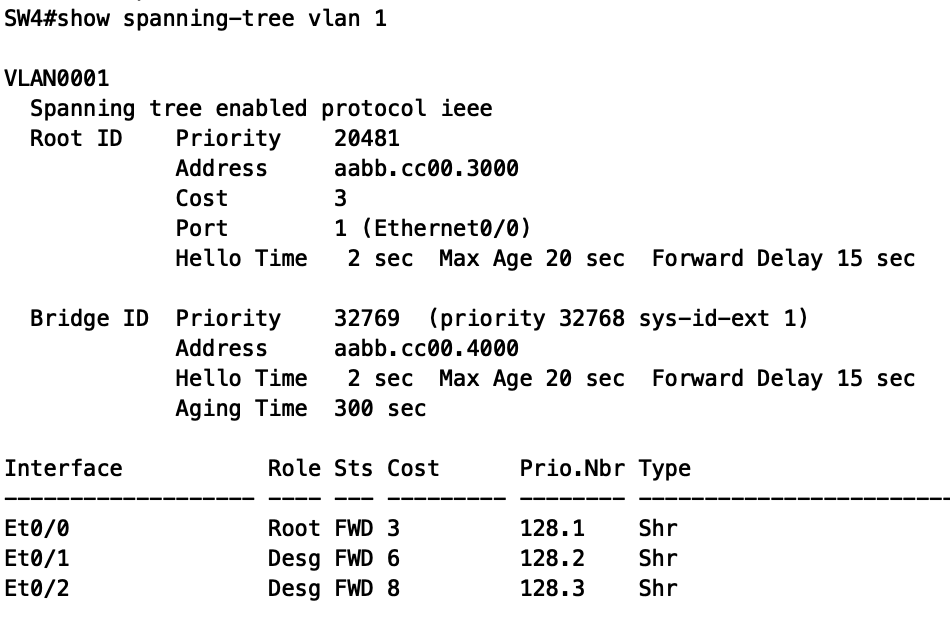 If I now wish to optimise the STP topology so that SW1 uses its directly attached link to the root, I could change the link cost on SW1 e0/2 to a value lower than 6, as this is currently the best cost to the root.

This is done using the interface command: spanning-tree cost 5

I could also Remove the existing static cost configuration and change the link bandwidth to 1 Gbps; this will make the link cost automatically set to 4.

When looking at the root path cost, another useful output is provided by the show spanning-tree vlan <x> interface <ifId> details command. I believe the output below is self explanatory: