In a previous post, I’ve shown how we can use aggregate routes to optimise the routing table. Another way of achieving the same – though with different functionality, is by using Generate routes.

Generate routes have the following characteristics:

For this lab I will add an extra subnet configured on router R1; the subnet is 10.200.6.0/24. By using a generated route, we can still create an aggregate on R3 without risking that a packet destined for 10.200.5.0/24 (not an active member route) being discarded since the aggregate has a valid destination as the next-hop.

In the topology below, solid line arrows indicate routes configured on the device; dotted lines indicate flow of prefixes as dictated by the configured routing policy.

R2 is using static routes towards R1 so it can reach the locally attached networks on R1. R2 is running OSPF and has R3 as it’s directly connected neighbour; it is also running iBGP and peering with R3 as well. Default routing policies are used, unless otherwise configured. Lastly, R2 is configured in AS64501.

R3 is running OSPF and has R2 as it’s directly connected neighbour; it is also running iBGP and peering with R2. R3 is configured in AS64501. Lastly, it’s peering with ISP1 and ISP2 routers via eBGP. The default route points to ISP1

The objective here is to set a conditional default route pointing to ISP2 instead; this should only happen when the 85.85.85.85/32 route exists in the routing table on R3. 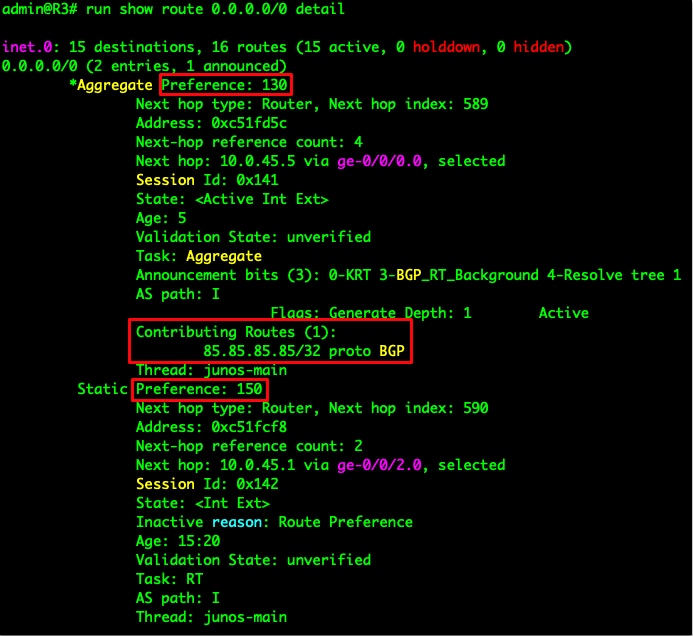 Next I configured the policy and the generate default route 0.0.0.0/0:

NOTICE through the routing policy cond-adv we actually change set which route(s) to be considered as contributing routes!

If there is a match against the host route 85.85.85.85/32, it is then accepted as contributing route and as a result, the next-hop will be set towards ISP2 router; otherwise there will be no valid contributing route.

In order to test, since the host route is configured on the loopback interface on ISP2 router, to stop advertising it I’ll just disable the interface.