The OSI Model at Work

Back in the days, when I started studying networking, it didn’t take long before coming across the OSI Model and very quickly, I got overwhelmed! I just couldn’t see the point of it and, to be honest, I ended up memorising it without fully understanding it.

If you are going through that same trouble, I am hoping this blog will give you another start.

WHAT IS THE OSI MODEL

Historically, the OSI model represents an evolution from the original DoD model, published in 1970.

The OSI model is nothing more than a scalable framework for network communications, defining communication standards and protocols spanning seven layers.

However another representation of the OSI Model exists as it applies to the TCP/IP protocol stack; it is referred to, as the TCP/IP Model and it includes four layers only. 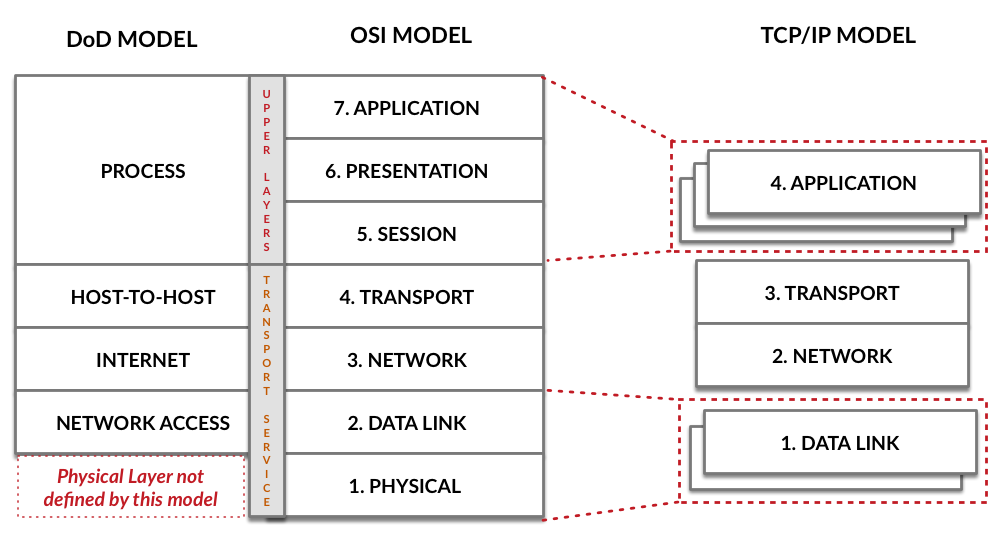 As with any model, it normally helps if we put them into a more practical context. So let’s do that …

A network device doesn’t need to provide functionality at all layers; in fact, we often hear people say that specific devices, work at specific layers only.

For example, in the past, switches were known to work at L2 – providing switching functionality only. But for long time we’ve had switches that operate at L3 – providing routing functions as well. We also have L7 firewalls – these can inspect Layer7 protocol packets such as HTTP, SMTP, etc.

End-to-end communication does not necessarily mean that two devices are involved, as long as the same device implement both the client and the server side processes. An example of this is, connecting your local browser to a web server hosting pages on the local machine. In this case, the local machine implements both the server component (the web server process) and the client component (the web browser).

Network communications occur between processes implemented on different or on the same host.

So you write a letter to your friend; put it in an envelope, write the destination address on it and lastly, you take it to the post office. At the post office, all letters ready to be sent out are then boxed up and sent to a dispatch office. This process continues through different delivery layers until you eventually get the letter delivered to your friend’s home. Your  friend opens the envelope and reads the letter.

This process is very similar to how data flows from source to destination. Encapsulation is the process by which data is formatted (packaged) as it travels through the different OSI layers; the reverse process is known as Decapsulation.

The diagram below illustrates these two processes.

END-TO-END IN A NUTSHELL

Hopefully you can now see how the OSI model …